Let's all board on a journey to the land of AI fairness that we, a group of private players (Danone, Ekimetrics, datacraft), researchers (Telecom Paris, Inria), and students (Université de Cergy), partnered to uncover fairness & ethics in Artificial Intelligence from a practical standpoint. Through this journey the group tried to tackle the following challenge: “how should a Data Scientist concretely react when exposed to fairness concerns?”.

We started with a series of workshops to discuss the existing tools and methods, assess the needs and define an ethical charter. This led to the writing of a first popularisation article, in French, which you can find here.
Then we continued our journey with a benchathon - definition below - in which the group participated to get a quick and documented opinion of an already rich fairness/ethical ecosystem. It first explains how the concept of benchathon accelerated our practical grasp of the topic, and then explores the first conclusions drawn about the fairness ecosystem. You can find the code developped during this benchathon on the datacraft's GitHub repo.

Benchathon as an innovation catalyst​

At this stage of our “fairness journey”, we had a decent high level understanding of what fairness could imply in real life. It was then the right time to start acting concrete: try and derive a pragmatic methodology, even if it implied implementing our own routines.

To that end, a very first step was to make sure we’d not reinvent the wheel, and we’d plainly benefit from existing open source contributions. This happened during a one-day benchathon. If you work in tech, you may already be familiar with the following two notions:

Hackathons usually involve teams that compete on the “same topic” for 2 to 3 days. Because we were limited in time - 1 day, rather than focusing all on the same “thing”, we decided to make the most out of the presence of 9 data scientists: we shared and split between us the technical analysis of several fairness open source libraries - AIF360, Shapash, Aequitas, What if tool, Fairlearn. Hence the concept of benchathon.

Even though all of us were entitled as “Data Scientists”, we all came from different structures, different backgrounds, and different (coding) habits. That diversity definitely triggered (and still does) great discussions and perspectives along the initiative. Still, an important step during the benchathon was to settle on an interpretation grid that would make the outcome as reusable and general as possible, and as unbiased as possible - in line with the topic then :). A few criteria were identified:

That being set, what was important was also to pace the day, so that despite the fact that small groups worked independently, we always kept an overall coherence and dynamics. It meant:

Taking a step back, below are a few takeaways:

If you are further interested in the exhaustive findings on the five libraries that were studied during the benchathon, we summarized our conclusions in this file. The following section aims at providing a (subjective) summary of these libraries, in increasing relevance order, with respect to fairness / ethics.

Open source library developed by MAIF - a French insurance actor, and Quantmetry - a French AI consultancy, that mainly focuses on interpretability (no built-in fairness-oriented feature). It acts as a layer on top of the usual interpretability toolbox (feature importance, SHAP values, …). It comes with a very decent web interface, high quality code, and a great community/documentation. It also provides an audit report of the project (from data prep to modeling, to exploratory analysis).

In a nutshell: great project, but not that relevant (yet?) for fairness topics. 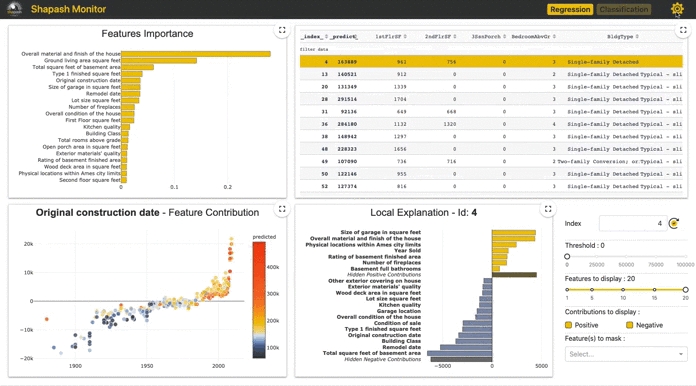 Open source interface developed by Google. It mainly aims at conducting counterfactual analysis (“what would be the machine learning model prediction if we changed the value of that particular attribute, like the sex e.g.?”). It comes with a decent web interface, especially to deal with unstructured data like images. Documentation is however not handy to deal with.

In a nutshell: great interface. However, counterfactual analysis is only one (important) feature among the different aspects related to fairness, which in turn does not justify a lock-in with that specific tool. 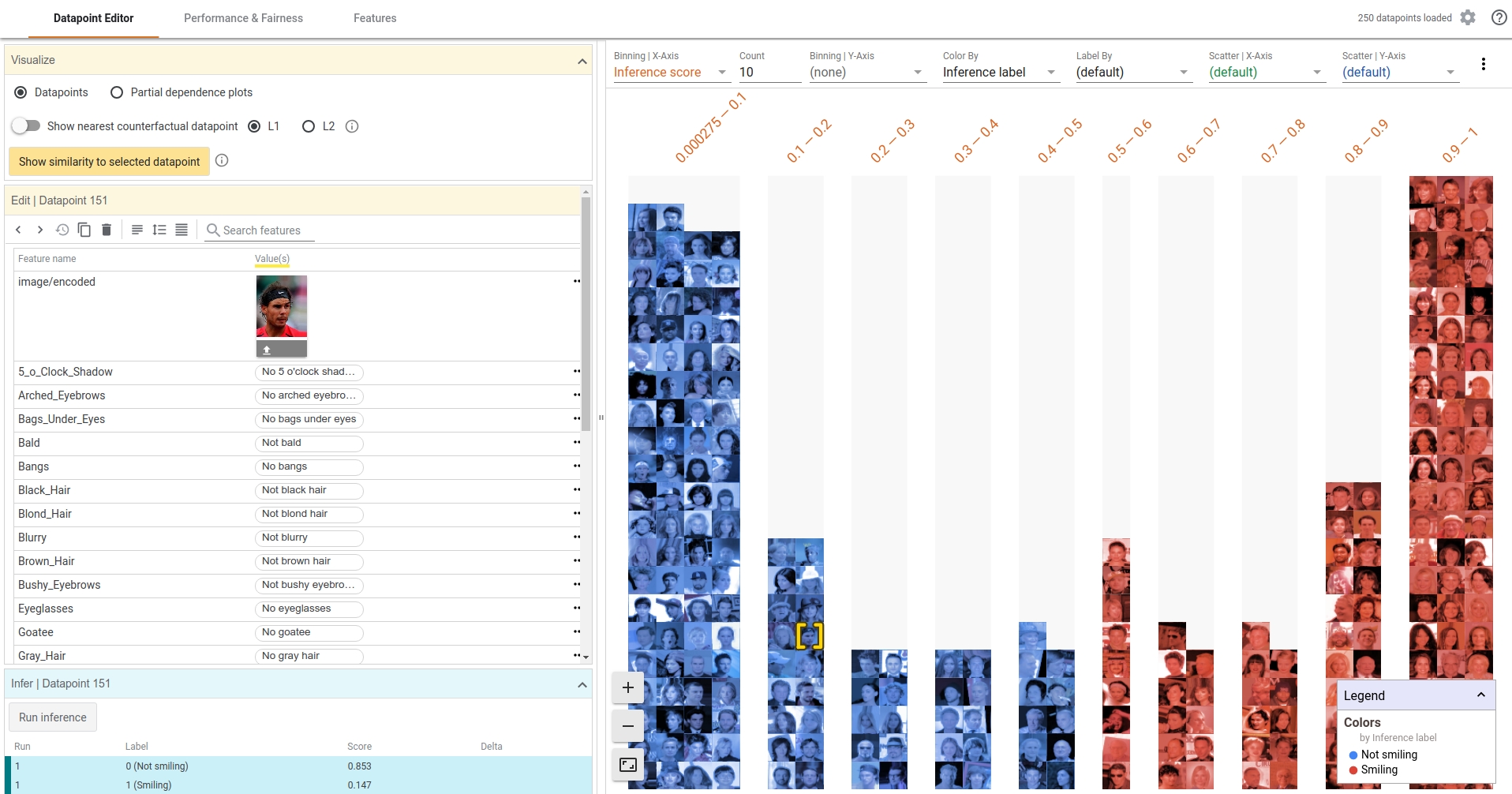 Aequitas is a bias and audit toolkit developed by Carnegie Mellon University. It aims at spotting unfair allocation compared to population repartition or wrong decisions about certain groups of people. It comes with a web interface (which we could not make work) and a Python library to help compute fairness metrics. Documentation is decent, especially their representation of the "fairness tree", which helps to navigate the (many and ambiguous) fairness metrics, depending on the use case.

In a nutshell: Aequitas is a tool that has been available for quite some time now, but that does not benefit from a living community. To be kept under the radar (or contribute to!). 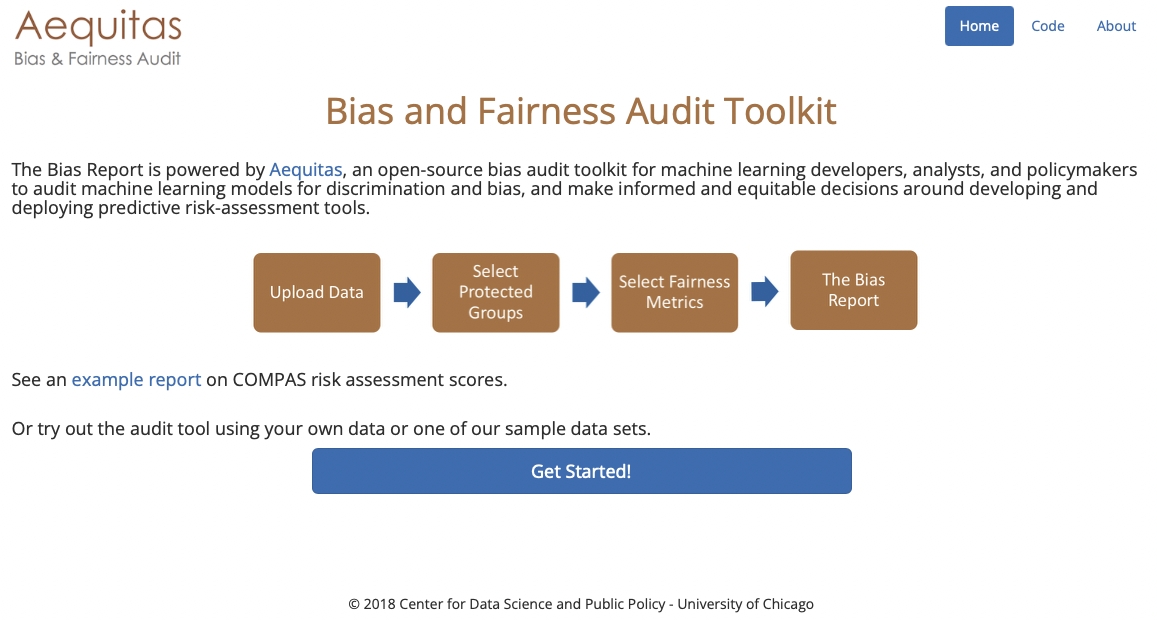 Fairlearn is an open source library maintained by diverse contributors (from Microsoft, Zalando, …). It aims at tackling each step of the fairness value chain. It implements fairness metrics, of which you have a summary below: 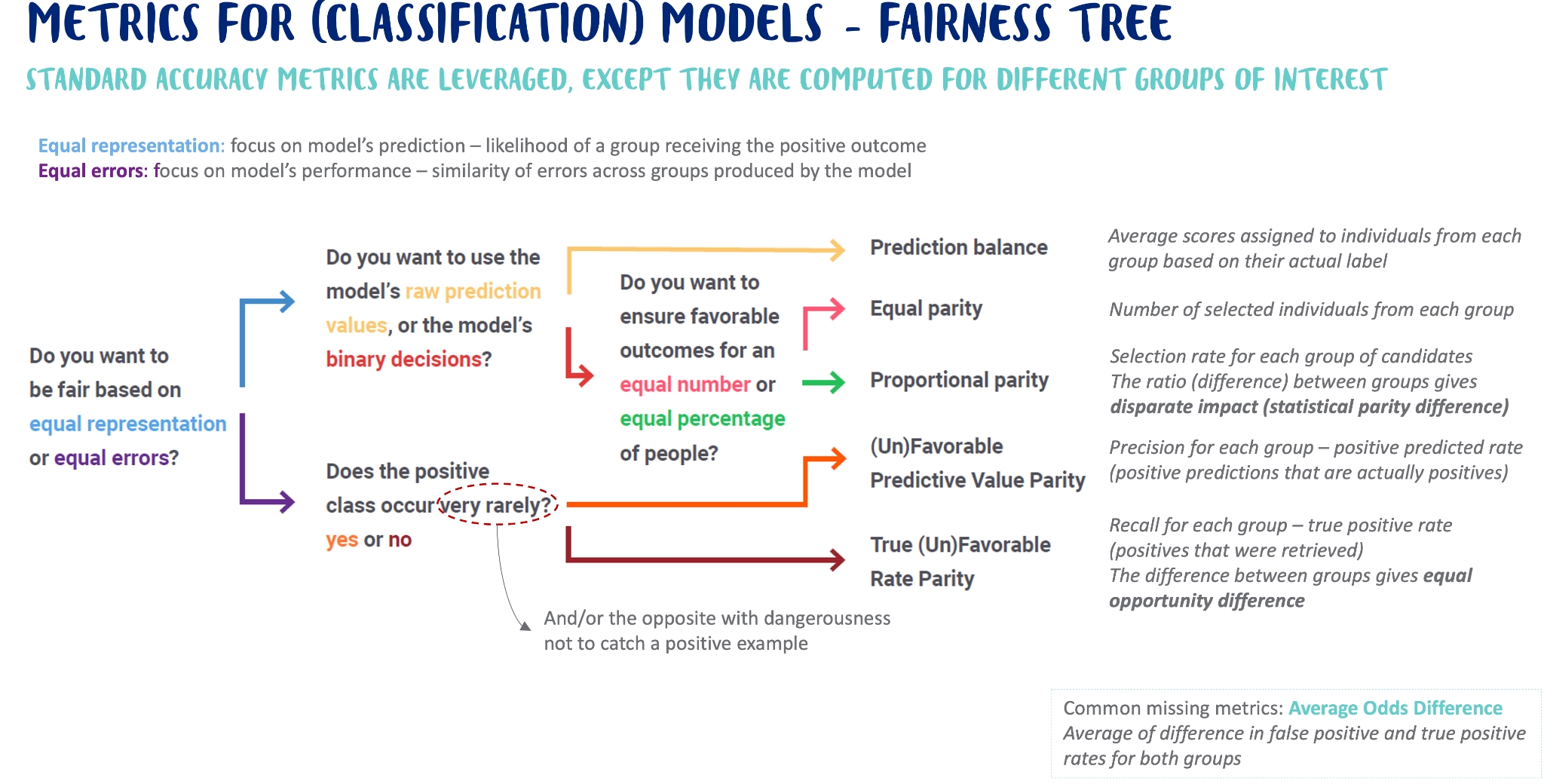 It also tries to go beyond the usual binary classification problem, which is the usual go-to when uncovering the fairness topic (e.g. giving a try at regression). However, making our way through the “get started” procedure or the documentation - yet well designed and appealing, was no easy task. Note that the library also comes with nice dashboards that allow, among others, model comparison.

In a nutshell: promising and active library for fairness topics. Accessibility could be improved. To definitely keep an eye on (or contribute to!).

Screenshot of the Fairlearn dashboard. Credits.

AIF360 is an open source library developed by IBM. From our perspective, and before doing this initiative, this library was considered as the go-to for tackling fairness topics. It comes with an online tool, implements a wide range of mitigation techniques:

It also benefits from a wide community, and comes with a user-friendly web interface.

However rich in terms of features / mitigation techniques, the documentation is quite poor (it is not unusual to go and directly look into the source code to get answers). Besides, (useful) snippets of code are disseminated in various Jupyter notebooks, which slows down the appropriation. Last, some choices regarding data representation (formatting) and/or object declaration/instantiation (like the main explainer object, which is quite verbose), led us to troubles when trying to get used to the library.

In a nutshell: AIF360 is a very rich and mature ecosystem. Accessibility is however currently an obstacle to its full exploitation. 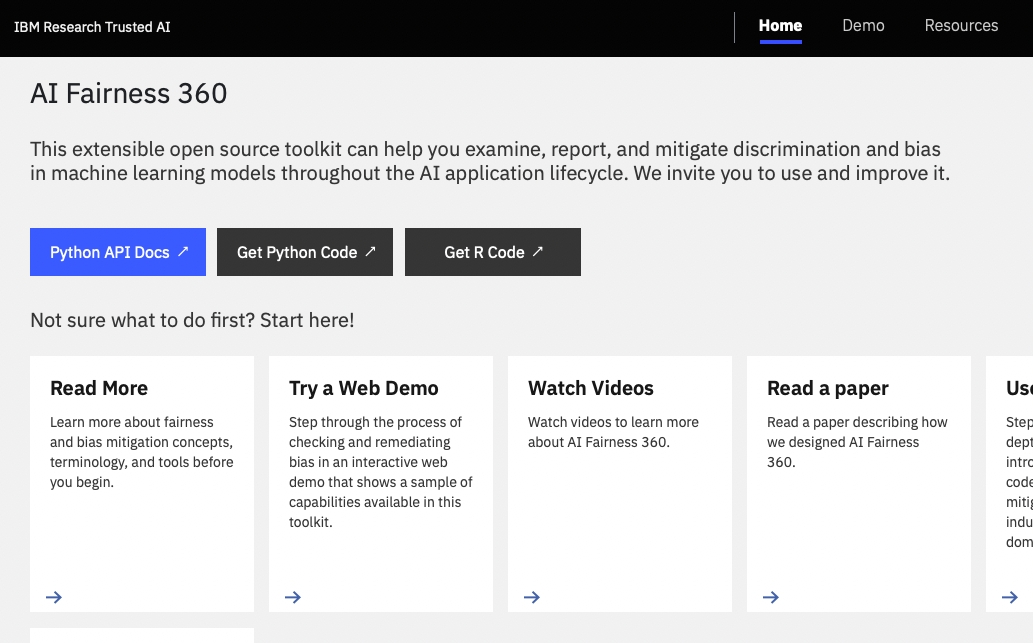 At this point in time, we had discovered very interesting libraries, some of them backed by great communities and capabilities. Still, some open points remained that we thought would be worth investing time on:

This is what will be tackled in the third article of this series. We’ll introduce Dalex, another library that will be used as a foundation to derive (our interpretation of) the whole reasoning when exposed to fairness / ethical concerns.